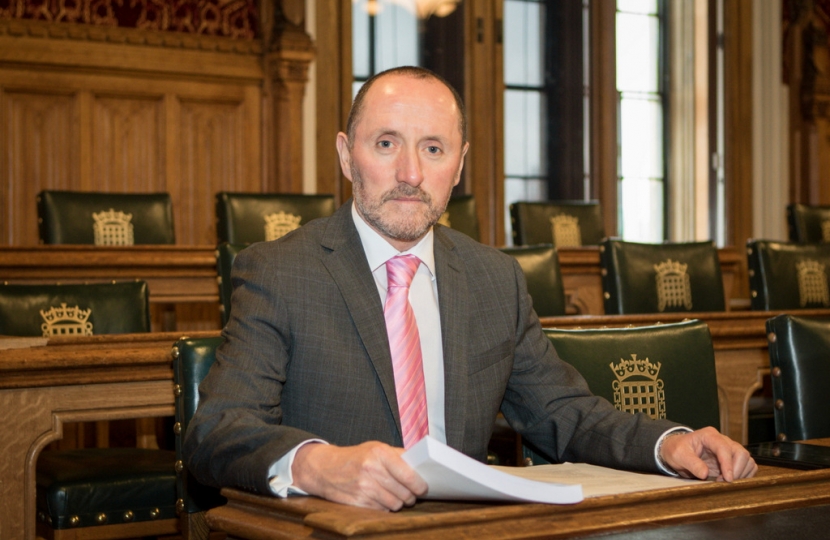 Eddie Hughes, MP for Walsall North, has today launched a consultation on his proposal to change the law to make carbon monoxide alarms required in more homes to help save lives from carbon monoxide poisoning. Nearly half (46%) of the nation’s homes currently don’t have a CO alarm, which could leave more than 12 million households across the UK at risk from CO poisoning.

Carbon monoxide is a “silent killer” that many people haven’t even heard of. It cannot be seen, smelt or tasted. But it is also almost entirely preventable. In recent years, we've seen over twenty-five people killed each year in carbon monoxide-related incidents. Hundreds of people are hospitalised - 264 last year. Approximately 4,000 people go to A&E each year with symptoms of carbon monoxide poisoning. There are many more suffering ongoing effects from poisoning that remain unnoticed and these figures are deemed to be much lower than the reality as symptoms are often confused with other illnesses.

On Wednesday 13th September, Eddie was given permission by the House of Commons to present a Ten Minute Rule Bill to prevent death and injury from carbon monoxide poisoning. Eddie has today published the draft law which focuses on: installation of alarms in private and social rented housing, installation of alarms in new build properties, tightening up rules for alarms in Houses of Multiple Occupation and requiring Fire Services to promote carbon monoxide safety.

This proposed law isn’t a silver bullet but it will certainly help and Eddie hopes that it will also further raise awareness of carbon monoxide poisoning. Carbon monoxide poisoning is predominately a matter of housing safety, and Eddie’s proposed Bill will improve the current legislation and will contribute to a reduction in the number of unnecessary deaths each year due to CO poisoning. The stories associated with these deaths are heart-rending.

Eddie is also launching a consultation alongside the draft law to help engage the wider public in raising awareness and seeking improvements from industry experts to ensure that his proposals are the best they can be. Eddie wants to hear ways to improve his draft law; from firefighters and gas fitters, to doctors, landlords and energy companies. The consultation starts today and runs until the end of the year.

Eddie Hughes MP - “I am delighted to publish a draft law which seeks to make the ‘sillent killer’ – carbon monoxide poisoning – history. My draft law proposes that not only should carbon monoxide alarms be required in new-build properties, but they should be installed in all rented properties, including social housing and those in the private rented sector. We should be designing this problem out.”

“We also need to ensure that people are fully aware of the risks associated with a gas that people cannot see, smell or taste, because any fuel-burning appliance that is not properly maintained has the potential to be a source of carbon monoxide. This is why I am also proposing that fire authorities have an explicit duty to promote carbon monoxide safety.”

“I am hoping that by consulting on the proposals we can come up with the best ways to save lives, raise awareness of the dangers and get support to change the law. I look forward to receiving thoughts on my proposed bill.”

Stephanie Trotter, OBE, President & Director of CO-Gas Safety, the Carbon Monoxide and Gas Safety Society - “We welcome Eddie’s proposed new law which is the next big step to make carbon monoxide poisoning history. We suspect thousands of people are being affected by CO poisoning and remain unnoticed thinking they are just unwell. Too many people don’t even know what CO is and live with low-level poisoning without realising it. Headaches, vomiting and tiredness are just a few of the immediate symptoms, but in the long term there can be brain damage, memory loss and a change in personality. Audible carbon monoxide alarms to EN 50291 purchased from a reputable supplier can save lives and make a difference and we hope Parliament will back the law in January.”

Sue Westwood-Ruttledge, a 44-year-old mum of two from Sale, Greater Manchester, who works as a horse photographer was a victim of carbon monoxide poisoning - “I started to get lots of headaches and was generally feeling unwell. I was even diagnosed with vascular dementia, but for three years I was actually being poisoned by carbon monoxide (CO) from my boiler. It turned out the flue to the boiler wasn’t connected and that every day, toxic fumes built up, but at night, with the windows open, they escaped. My family and I had no way of knowing how close to death we were. CO kills 50 people a year in this country, but it’s still not on our radar. We were lucky, we escaped with our lives, but someone out there is breathing it in now – they’re being slowly poisoned – and the scary thing is they don’t even know it. I have since installed a CO alarm. A year later to the day that I discovered I was being poisoned by CO, the CO alarm that I had installed in my home office went off, signaling that there was a CO leak. I strongly support Eddie’s proposed law to increase the use of CO alarms because they will go a long way to help save lives and stop people suffering the way my family and I did for far too long.”

Paul Overton, Treasurer of CO-Gas Safety and stepfather to Katie Overton who died aged 11½ in 2003 of carbon monoxide poisoning in a private rented home – “I urge the Government to support Eddie’s Bill to make it mandatory that all rented properties that burn any combustible fuel, have carbon monoxide alarms installed. I am pleased that Eddie has launched this consultation today on his bill and encourage industry experts to have their say. I truly believe if we had had a carbon monoxide alarm installed my Katie would still be here today.”

Gordon Samuel, Trustee of the Katie Haines Memorial Trust and the father of Katie Haines – “In Katie’s case CO proved fatal but low-level exposure of CO over a long period can also cause brain and neurological damage. Some people, particularly the elderly, are ill for months and even years without knowing why. We won't rest until everyone in the UK understands the dangers of carbon monoxide and takes steps to ensure they don't fall victim to it. It's vital that people have an audible alarm and I welcome Eddie Hughes’ efforts to make this a legal requirement by landlords."

Over 12 million households at risk of CO poisoning in their homes
https://www.gassaferegister.co.uk/news/news-2017/over-12-million-households-at-risk-of-co-poisoning-in-their-homes/

Please find the link to the consultation here: www.eddiehughes.co.uk/silentkillerbill

Please share this press release and the link to the consultation using the hashtag: #silentkillerbill