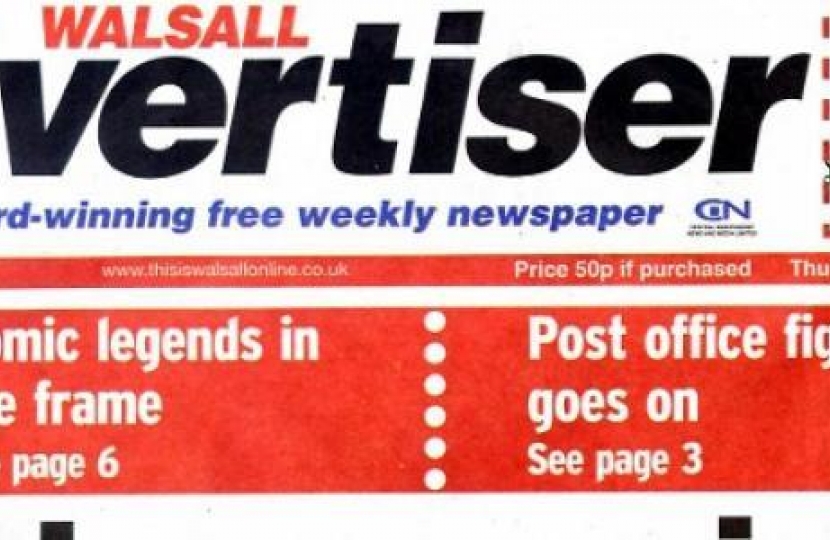 Parliament has returned, after the New Year, and things have certainly been exciting with the Cabinet reshuffle. I am so pleased to see Black Country representation in the top jobs with promotions for James Morris MP (Halesowen) who was given the role of vice-chairman of the Conservative Party responsible for training and development, Wendy Morton MP (Aldridge-Brownhills) who has been made a new Junior Whip and Margot James MP (Stourbridge), who has been promoted to Minister of State at the Department for Digital, Culture, Media and Sport. Congratulations to my Black Country colleagues – we have certainly put the Black Country on the map in Westminster!

In Walsall news, Bloxwich level crossing has now closed as Network Rail continues to upgrade the railway between Walsall and Rugeley Trent Valley. The upgrade means that trains will be faster, more frequent and quieter through the area. Network Rail has worked closely with Walsall Council to plan the closure and provide alternative ways of crossing the railway. A new road bridge at Central Drive will provide access over the railway for motorists, while a pedestrian footbridge will be built and is due to open in summer 2018. I am aware of the level of concern about this. While it will benefit the people of Bloxwich and the surrounding area in the long run, I will continue to raise the concerns of local residents and keep the pressure on Walsall Council and Network Rail to ensure disruption is kept to a minimum while the works are being carried out.

Shocking new figures show that more than three-quarters of all crimes recorded by police in the Black Country result in no action being taken and I think the Police and Crime Commissioner has some explaining to do.... In Walsall police took no action in 78.5 per cent of cases (16,521 of 21,152), with 60.78 per cent ending without the identification of a suspect. Other forces posted far lower 'no suspect' figures. In West Mercia it was 45 per cent, while the figure for Staffordshire Police was 41 per cent. The figures show that West Midlands Police is lagging behind when it comes to detection rates, with other forces proving far better when it comes to identifying suspects. Victims are being let down and I believe the disparity between the performance of forces proves this can't just be about money. This isn’t the fault of police officers, who are doing a great job serving our community, but is down to management. I’ve said that I believe the Police need more funding and I’ve already lobbied the Police Minister for more funding streams for West Midlands Police, with some success. However, the Police and Crime Commissioner wants to use the money to increase back-office pay rather than increasing frontline policing. I don’t agree. I will be doing what I can for my constituents to push the Police to ensure that these figures fall.

Finally, in the last push before the second reading of my Ten Minute Rule Bill to get landlords to install Carbon Monoxide Alarms in their properties, I have been lobbying my colleagues for support and working with Project SHOUT to raise as much awareness for this issue as possible in the press. Irrelevant of the outcome, I hope that by raising this issue with the public I have helped to highlight the dangers of CO poisoning and the importance to buy a CO alarm to protect themselves. If you haven’t given this some thought until now, you might want to consider the benefits of getting one.