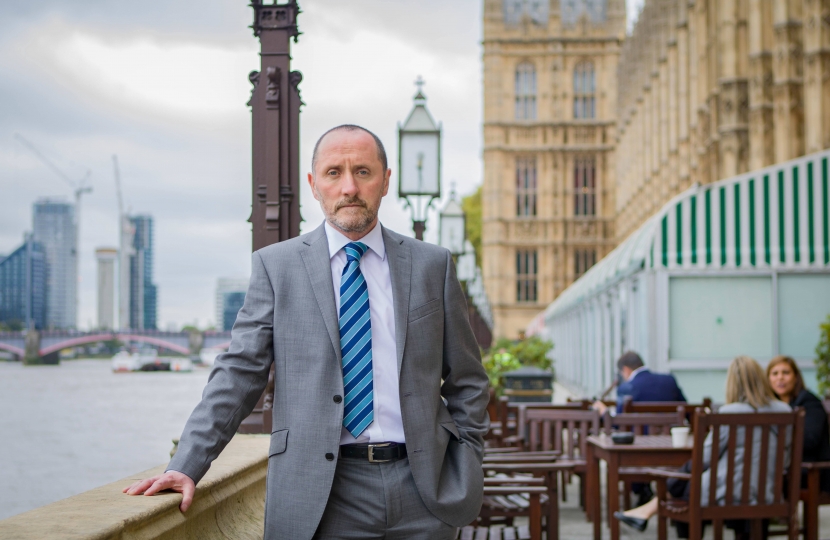 Interview with Inside Housing:

Eddie Hughes is the only MP who’s also the chair of a housing association. Nathaniel Barker finds out how he balances the roles.

Be honest: if you were told that the only MP who’s also the chair of a housing association was a Brexit-backing Conservative, you’d be somewhat surprised. But Eddie Hughes is just that.

He heads up the board of 20,000-home WHG (formerly Walsall Housing Group), as well as representing Walsall North in the House of Commons.

He’s also one of Britain’s newest MPs, having first been elected at the snap general election on 8 June by a 2,601-vote majority. In so doing, he bucked a general trend of Labour snatching Tory seats – and became the constituency’s first blue tie-wearing candidate in 34 years.

He puts this down to his local connections and support for Brexit in a leave-voting constituency.

Just as he’s a Tory MP in an area which is not traditionally Conservative, Mr Hughes himself does not naturally hail from the political right. He grew up in a staunchly left-wing Irish family; his brother is a Labour councillor on Birmingham City Council and his first ever vote was for a Labour candidate.

But during a politics A-level evening class taken post-university, he had a realisation.

“The guy that taught me politics could obviously see that I was keen and he suggested that I take copies of the three main party manifestos away, read them and figure out which one was for me, and I discovered I was a closet Conservative,” he recalls.

“I think my dad was always more proud introducing my brother to people as Labour than he was introducing me as a Tory!”

Mr Hughes joined the WHG board in 2012 by virtue of being a local councillor, becoming chair in 2016, and also rose to become deputy chief executive at YMCA Birmingham before arriving in Westminster.

When asked if his work in housing impacted on him politically, he replies: “Oh, hugely.”

He admits that as a Conservative joining a housing association board he was initially sceptical.

“I didn’t naturally support the principle and understand exactly the services and benefits that they offered."I have slowly moved to the centre of the political spectrum, converted by WHG"

“But I have slowly moved to the centre of the political spectrum, converted by WHG, because actually I see the fantastic benefit that housing associations provide. Not just in providing the fundamental point of good-quality accommodation for those that need it, but the peripheral services of, for example, helping people into employment.”

Indeed, housing informed Mr Hughes’ first major act as a parliamentarian. In September, he introduced a Ten Minute Rule Bill to toughen up carbon monoxide laws. The bill, which would include forcing social and private landlords to fit alarms as appropriate, will have its second reading in the Commons on 19 January.

What, for instance, would he like to see the government do more of to help the sector? More money for land remediation is his immediate answer.

“We’ve got factories from a previous manufacturing era that are now derelict in prime locations,” he says. “You’re not going to make a lot of money by building houses in my constituency, but we desperately need them.”

David Orr, chief executive of the National Housing Federation, said something similar following the Autumn Budget. He said the chancellor had not been “bold enough”.

This is not Mr Hughes’ view, however. “The only reason he says that, in my humble opinion, is because he expects too much of government,” says Mr Hughes. “The government has done its bit with regard to the Budget. Everybody else needs to contribute in order to get this moving.”

We turn to Brexit, and whether he’s concerned – like many in the industry – that leaving the EU will have an impact on building capacity."

But Mr Hughes hits back that the UK’s reliance on immigrant construction workers is the fault of the big house builders, “who haven’t trained a single plumber or bricklayer for the past five years because they’ve had the option of getting that cheap trade supply from mainland Europe”.

And then to Universal Credit. Surely, as one of the people ultimately responsible for a housing association’s financial viability, he has reservations about a policy which threatens a spike in rental arrears when it’s rolled out in Walsall this autumn?

But no. “The roll-out needs to continue,” he insists. “These things are just of a huge scale, and it’s tricky – nobody’s saying it isn’t.

“And with regard to whose responsibility it is, I say again: do not just look to the government to say ‘you need to sort all this out’. Walsall Council and WHG – and other housing associations, I’m sure – have done a great job of working together.”

Time for a final question, and it seems an obvious one: would he like to be housing minister one day?

“Oh, my goodness. I have to say, my number one ambition is to get re-elected – but that would be followed very closely by the idea of being housing minister. I’d settle for just following [then housing minister] Alok [Sharma] around and carrying his bags for him.”